Last nights development committee discussed the application for 47 dwellings on London Road (15/00736/FUL). The officers report can be read here. [download id=”852″] This application have been previously deferred for clarification on a number of points.

Off to a shaky start due to the technical issues in the council chamber (no projector, so no plans available), the meeting commenced nearly 30 minutes late. There was about 10 visitors in the public gallery.

The council officer (Mike Shranks) gave his opening report on the planning application and how the issues had been addressed that concerned the members at the last committee meeting. Once we had heard the report (with no visual aids), the officer asked us to ‘trust’ his words – speakers were invited from the public. The applicants agent spoke first. We then heard questions from committee members. These ranged from clarification on the proposed crossing, off street parking, whether the road was adoptable and the proposed drainage system.

The proposed drainage system consumed most of the discussion, with Cllr Stanley taking a lead on the flooding issues asking whether the design of the system was adequate to accommodate the flooding issues that West Rayleigh has seen in recent years. I asked whether upstream flooding had been taken into consideration and was assured by the officer it had been.

I also made it clear I was not convinced the proposed crossing was adequate and safe for pedestrians being in a 40 mph zone. 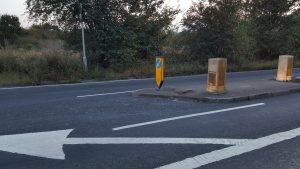 I questioned as to why the new estate would not have its own play area, with a £45,000 contribution for the Little Wheatley’s play area, once the money runs out the tax payer will bear the full burden of additional maintenance.

Land will be taken from Rayleigh Sports & Social club for the proposed alleyway at the back of the development. 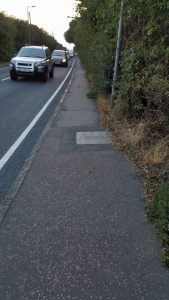 The report also makes mention of cycle routes (I see none of them in this area, in fact very few in Rayleigh). Finally I raised the issue of safety as the report proposes that the developer will widen the footpath in front of the development to 2m, however the London Road footpath is wholly inadequate on the North side (in my opinion) and is less than 2m wide.

Finally Councillor Mountain spoke up and reminded members that this application was again before the committee to gain clarification on the reasons the application was previously deferred – he then moved for approval for the application. The vote was taken with all members approving apart from myself and Cllr Stanley abstaining.

Town Centres – Housing for the Elderly or Young?

Developing A Disaster On Our Highways

The Road Ahead Is Very Bumpy Indeed

Podcast: Over Development In Rayleigh & The Application for 35 Flats At The Rear Of Superdrug

Tories Gasp for Air over AQAP

The Definition of Affordable?

When I look at our local traffic problems, I think what a shame it is that you don't see more families taking to the roads on bikes - then looking around Rayleigh I see that cycle lanes are either not feasible or just plain forgotten by our local highways representatives. I'm an occasional cyclist (no lycra here!) and often use my bike to nip ...