Tories Gasp for Air over AQAP

Wednesday was not a good night for the blues at the Rayleigh Town Council meeting to discuss the AQAP. It was one of those subjects that I was particularly interested in having spent my earlier life carrying out scientific studies for the MET Office and The Institute of Hydrology, and this is what this AQAP should be based on. Cold, hard FACTS.

Getting straight to the point, on inspection of this draft AQAP there really didn’t seem to be too much science behind it! Sadly, the officer at RDC with responsibility, declined to attend the meeting as Rayleigh Town Council are just consultees. 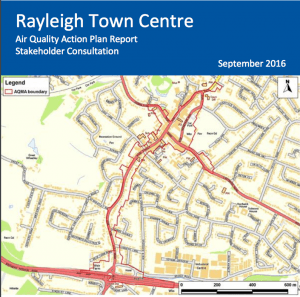 Our residents are seemingly expected to ‘go with the flow’. RDC is clambering to fill an impending deficit in the budget, and by the admission of the portfolio holder for planning – Cllr Ian Ward, they intend to build their way out of the red back into the black!! Somehow I’m feeling this isn’t the solution. I challenged Cllr Ward on the alleged £60k of public money that has been spent on ‘remodelling’ the town centre traffic system. This appeared to be news to some members. However Cllr Ward did oblige on detailing the results of the ‘remodelling’ – which appeared to be nothing more than changing Zebra crossings to traffic light controlled crossings. There was hope this would help the traffic to flow better, I’m not sure that £60k is worth ‘hope’ such as this and doesn’t seem like terrific value for money in these times of austerity.

Other suggestions were that the Royal Horticultural Society had been engaged to advise on ‘flower power’ to help reduce the pollution. I challenged this and was informed by Cllr Margaret Spencer to refer to the ‘London Plane Trees’. I’ll openly admit I’ve not got ‘green fingers’, but I did argue with Cllr Spencer that is this the reason recently the Mayor of London has announced a $1.1bn plan to improve air quality? Sounds like a lot of trees to me, if this is the answer to problem as Cllr Spencer suggests. Since the meeting I’ve had an opportunity to see if Cllr Spencers claims can be backed up and this is what I’ve found.

But how did it go from interesting curiosity to the urban tree of choice lining so many of London’s streets? It was planted en masse at a time when London was black with soot and smoke from the Industrial Revolution and when population expansion forced greater urban planning.

To be fair to Cllr Spencer there maybe some evidence that this can help on the DEFRA website. For me it’s the practicalities of planting out our areas that are suffering high concentrations of gases such as Crown Hill & High Street.

Strong discussion took place, and there were lots of concerns from the members of the council. I think one aspect of the draft plan that we all agreed on was it was entirely naive and unrealistic.

We had further comments from some councillors about reducing pollution in the town centre by asking delivery vehicles and taxis to turn off their running engines when they are waiting. They may not have however considered refrigerated vehicles and similarly for taxi’s it’s a choice between air conditioning and heating in the taxi and long periods between customers could mean a taxi could be an uncomfortable experience.

My fellow Lib Dem, Cllr Chris Stanley, also informed the council that our party had offered to monitor other parts of Rayleigh that could potentially have a problem with the air quality as reported by our residents, but this offer of help was turned down by RDC’s officer! – The cynic in me wonders WHY????

Overall it was a healthy debate and hopefully educational – Rayleigh Town Council will send off their findings to the Rochford District Council. You too can have your say as the public consultation will run until 3rd January 2017. Consultation responses can be sent to [email protected] or sent to the Council postal address marked ‘Air Quality’. The document that the consultation is based on is here

Town Centres – Housing for the Elderly or Young?

Developing A Disaster On Our Highways

The Road Ahead Is Very Bumpy Indeed

Podcast: Over Development In Rayleigh & The Application for 35 Flats At The Rear Of Superdrug

The Definition of Affordable?

Thought for the day - If you could see the air pollution in Rayleigh would it look like this?

So it's a foggy day right? But as we walked back from the High Street along the London Road, I did ponder to myself whether if air pollution was visible to the naked eye, are these the types of images we would see like in China? I think it's an interesting thought as so often it's said "Seeing is believing" - in this case though just because we can't ...